RS. Winford could scarcely contain the news, and her own excitement. So much so, that she had put on her bonnet in haste on her way to the Barton house, and tied the ribbon in a fitful knot.

“There is a new Doctor coming to call,” she cried.

In nearly perfect harmony, the widow Barton and her two daughters exclaimed, “A new Doctor?"

“I have learned that he will be arriving this very day,” Mrs. Winford continued, catching her breath while still working at the knot. “He is traveling from points afar, where he gave demonstrations in the art and mystery of medicine and surgery.” 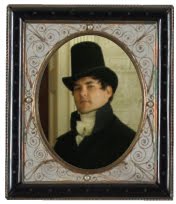 “And he is to come here to demonstrate his craft?” The widow’s face betrayed her fear that such a demonstration might offend her daughter's delicate sensibilities.

Mrs. Winford could read her friend's thoughts and immediately went about assuaging her trepidations. “He has demonstrated before the Royal Society in Paris, the gentlemen in New York, and even to groups of ladies and their children, without a single casualty due to sick stomach.”

“Indeed? Pray, what is his background?” the widow Barton asked, her interest renewed for the sake of her still unmarried daughters.

“He is quite mysterious. A British Naval Surgeon for some time, but upon what vessel I have been unable to discern. His wife died whilst he was away at war, leaving him a widower with four young daughters these five years past, and he has never remarried.”

The widow Barton and her two daughters perked up at this bit of news, just as Mrs. Winford knew they would. “He has only recently come to this country to ply his trade and make his home, since his discharge from the service.”