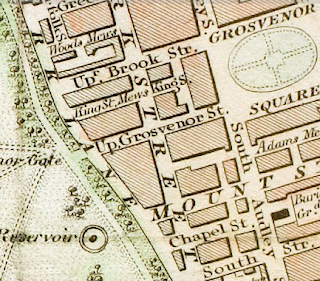 The entirety of my day has been spent in riding on the outside of mail coaches from Alton to London. Had I not the funds to purchase a ride on the interior of said coaches you ask? Originally I had purchased just such a ticket, but when we stopped in Surrey, we were joined by a young woman and her baby and I relinquished my seat inside to them.

I rode outside with several others, the wind and cold buffeting me. I covered my face and ears as best I could with my heavy woolen cloak, but to no avail. By the time I was deliver'd to Number 9 Upper Grosvenor Street, I was wet to the bone and exhausted.

My arrival this evening set the entire household into quite a state of excitement. I found myself surrounded by the staff and family, children running around my legs. They were all very eager to get me out of my wet things and settled in for the night.

Mrs. Gamble, who has always treated me in the manner of an overly affectionate sister, fussed over me and chided me for riding in the out of doors for so prolonged a period. She was certain that I would catch an untimely death. She ordered her housekeeper to have more logs placed on the fire in my room and additional blankets put on my bed.

There were already several letters waiting for me on a little silver dish by the front door, including one from Miss Waterman herself! I shoved it into my damp waistcoat pocket straight away to be read at my earliest convieneance.

After changing into a suit of dry clothes, Mrs. Gamble moved me into the kitchen where she fussed over the state of my hair and wool and ply'd me with pies of every sort. She also had a bottle of wine brought up from the cellar which I have been slowly depleting for the last hour.

I am warm and happy, it has been an age since I was taken care of in such a manner.